A country of two extremes, it is extremely hot in July and August, getting well above 30°C and even 40°C. Especially in the northern desert regions.

Boysun Bahori is a wonderful event, usually in May, it is a spring, folklore festival in Boysun in the Surkhandarya Province. 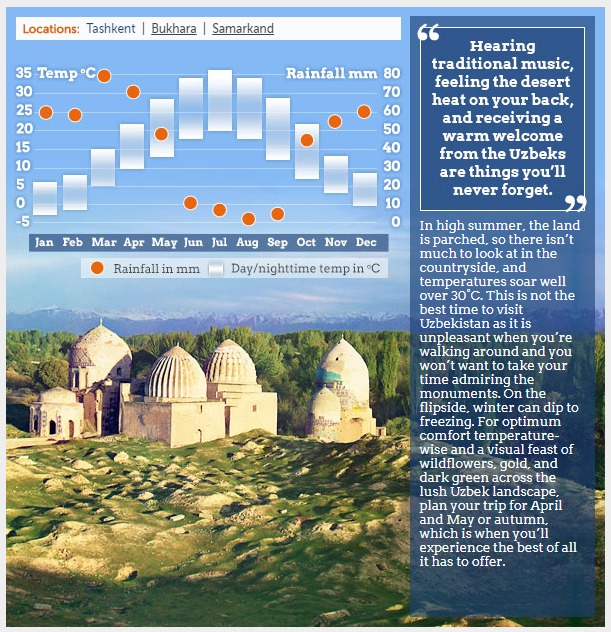 For many people, late September to October is the best time to visit Uzbekistan, as the temperatures are cooler, but still in the 20s, and there isn’t too much rainfall, making it perfect for site seeing. This is also harvest time, so the markets are full of fruits and wine is flowing.

It gets very cold from November to March, but the cultural sites are devoid of tourists, and the skies can also be devoid of clouds, making this time a wonderful time for photography – and cheaper flights. January and February are the coldest months, with temperatures dipping to just below zero, although rarely in Tashkent.

If you are on a tailor made trip, and want to fit in a bit of skiing in Tien Shan Mountains, just under 100km from Tashkent, December to March are your best months.

Independence Day celebrates the end of Soviet rule on 1st September every year, with feasts and festivals all over the country. There is a particularly big event of music and fireworks in Alisher Navoiy National Park in Tashkent.

If you want to visit the desert region, treks take place between March to May and September to October.

As a Muslim country, Uzbeks observe Ramadan, the Muslim holy month of fasting, abstinence, and prayer. This culminates in Eid ul-Fitr with much feasting and fun. It falls May and June in 2018-19 and April and May 2020-21.

Navruz is a new year celebration held on 21st March every year in Uzbekistan, but one with Iranian origins. It means ‘new day’ in Iranian and is time of year when people celebrate renewal and rebirth. Like a spring festival really.

The many species of wild flowers of Uzbekistan, most famously red poppies and tulips, bring the Tien Shan Mountains to life between end March and May.

Maybe you also wanted to go on a trip to Uzbekistan?

Choose the destination and your unforgettable trip around Uzbekistan.